I have to confess something.  I believe I am developing a slight addiction to Pinterest lately.  A few years back, it was blogging.  Then, I finally jumped on the Facebook bandwagon.  Now, Pinterest.  It is a brilliant way to search and see what people are doing, making, building, cooking, and on and on and on.  I don't think I can get on there for just a few minutes without it turning into a half hour.

Lately, I've noticed a Pinterest trend in slow cooker meals.  Who doesn't love a meal you can stick in your good ol' Crock Pot?  And, you can make just about anything but salad in your slow cooker.  From cakes to pasta, my slow cooker never ceases to amaze me. Plus, it is really hard to screw up a meal.  I can only remember botching up one meal in my Crock Pot.  It was some kind of potato, corn, and ham Weight Watchers meal that had been handed down to me back when I was a very novice cook.  Let's just say I took the term "set it and forget it" a little too liberally and ended up with a very burnt bottomed meal.  Now I have a timer on my Crock.  If I am leaving the meal unattended, I set the timer. Moral of the story, get yourself a Crock Pot or nicer slow cooker that has a timer that automatically switches to a warming setting when you cannot supervise your meal.

Enough preaching, on to the stuffed peppers... 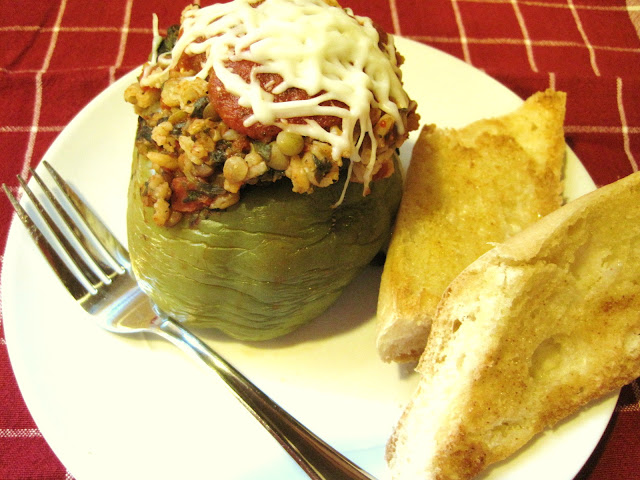 I've not ever made stuffed peppers in my Crock Pot before, but was very pleased with the turn-out.  These peppers are a very filling vegetarian meal.  Stuffed with brown rice, lentils, spinach, diced tomatoes, onion, garlic, and spaghetti sauce this meal will save you time and money if peppers are on special.

In a large mixing bowl, combine the rice, lentils, spaghetti sauce, spinach, tomatoes, onion, and garlic.  You can add as much salt and pepper to your liking.  Stir until combined and scoop the lentil mixture into the green peppers.  Spray your slow cooker pot with non-stick cooking spray.  Place the peppers into the slow cooker, cover, and set on low.  Cook for 4 to 5 hours.  Top with more spaghetti sauce if you like and divide the cheese among the peppers.  Cook for another 5 to 10 minutes or until the cheese is melted and serve.