From Kansas City with Love

Despite the possibility of severe thunderstorms/ tornadoes last night, we ventured out to meet some friends from college at 75th Street Brewery.  While the brewery is mainly known for it's beer, I had one of the best slow cooked pork dishes I think I've ever had.  Because many are there to enjoy libations, they offer a nice array of "small plates" which save you a little money.  I dined on the 7 Hour Roasted Pork served over a lovely risotto with a side of grilled asparagus.  Sweet, tender, goodness.  That is all I can say.  And to think I almost didn't order this goodness all because we are having Chipotle Pork Tenderloin tonight is just ludicrous.

I am so excited to share this recipe with you after making some additional changes.  I try not to steer too far from the weekly menu post.  Last night changed my culinary experiences a little and I just had to share.  I've taken the lighter cut of the other white meat, simmered it in a lovely chipotle sauce, and then after removing the fork tender pork to rest, created a spicier copycat BBQ reduction from last night's meal. The reduction sticks to the pork and takes it to perfection.  Trust me about taking the time for the BBQ reduction is well worth it.  I know something about BBQ after living in Kansas City for eight years.  Slow cooked pork + BBQ reduction = love from Sara Nickel to you:) 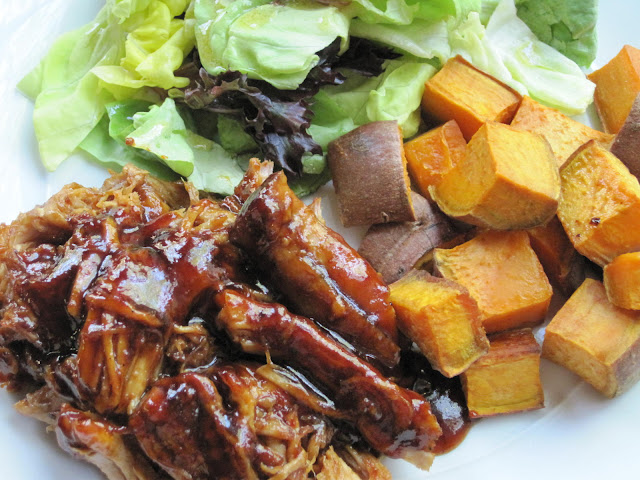 In a blender or food processor, blend the garlic, shallot, chipotle peppers, adobo sauce, honey, cumin, and cinnamon until smooth.  Remove the pork from the skillet and place in a slow-cooker.  Pour the chipotle sauce over the pork and spread until the pork is covered on all sides with the sauce.  Cover and cook in your slow cooker on low for 5-6 hours.

Remove the pork from the slow cooker and place in a dish to rest.  Reserve the juice from the cooker and pour into a small sauce pan.    Raise the heat to low or until the juice begins to simmer.  Whisk in the brown sugar and BBQ sauce.  Continue stirring occasionally and simmering until the sauce reduces to the consistency of melted caramel.

After the pork has rested and the sauce has reduced, shred the pork and pour the sauce over the pork.  Toss together until combined and serve.  You could easily make sandwiches, serve over a risotto, or on it's own with roasted sweet potatoes and a salad as I did.