One of the things I really miss since going gluten-free is a good deep dish pizza.  I remember my first deep dish pizza experience so fondly.  I was with a bunch of sorority sisters celebrating a bachelorette party in Chicago.  The best deep dish really can only be found in Chicago, but Barley's Brewhause in Kansas City does a pretty good replication with their Windy City pie.  Sadly, though, I can no longer enjoy the wheat variety and I'm still sticking to my Drop 10 challenge.  I've lost a total of 6 pounds so far!  Last night I was craving a deep dish pizza and was ready to fly myself to Chicago.  So, I decided to make my own deep dish pizza. 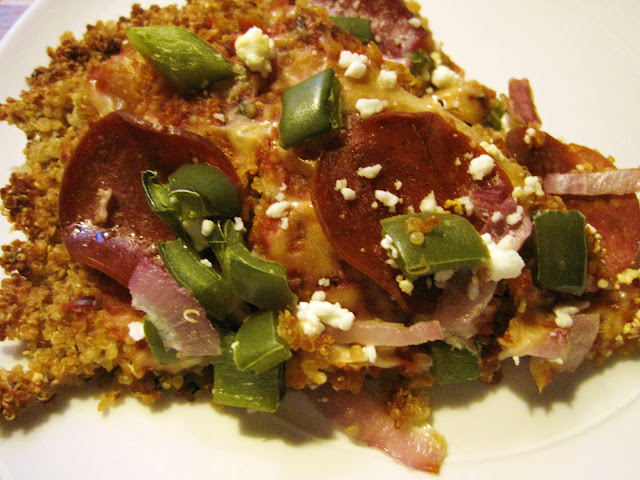 You would never know this pizza is actually good for you!  Quinoa is packed with protein, amino acids, and fiber.  It is truly a versatile super food and is a staple on the Drop 10 challenge.  This pizza is loaded with all the toppings of a deep dish pizza, but with far fewer calories and fat.

Pre-heat your oven to 400 degrees.  In a large pot, bring the 2 cups water to a boil.  Add the quinoa, stir until the quinoa is dispersed.  Lower the heat and simmer until the liquid is absorbed (about 15-20 minutes).  Cover, remove from heat, and cool for 10 minutes.

Spray a large non-stick skillet with non-stick cooking spray.  Fluff with quinoa with a spoon and pour onto the skillet.  Drizzle with the olive oil and press the quinoa with your hands to form a crust in the skillet like so: 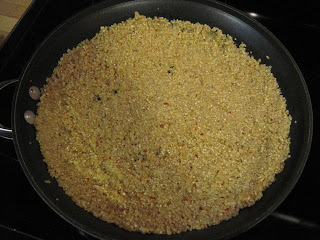 Sprinkle the Parmesan cheese evenly over the crust.  Bake in the skillet for 15 minutes or until the crust becomes lightly browned.  Remove from the oven.  Then, spread the spaghetti sauce over the crust.  Sprinkle the mozzarella over the sauce.  Layer the pepperoni, peppers, and onion over the cheese.  Sprinkle the goat cheese over the pepperoni and veggies.  Place the skillet back in the oven and bake for another 10-15 minutes or until the cheese is bubbly and starts to brown.  Remove from the oven and let cool for 5 minutes before cutting and serving.