How was your Monday? It was not the worst of Mondays, but not the best. Really, it was kind of an "eh" day. I don't know what it is lately, but a lot of my days have been kind of "eh." I'm not really that stressed out. Okay, that is really sort of a lie. Actually, it dawned on me last night that I am less than a month away from having surgery. I have not said much about this, as I really try to keep the conversation rather light around here. After our big visit with the reproductive specialist, they confirmed that my left fallopian tube is in fact blocked. Like a clogged pipe, this is causing nasty fluid and scar tissue to back up into my other lady parts. Thus, not making a very hospitable environment for a baby. On top of that, we also discovered that my egg reserve is low just by the genes I've received and that we no longer have time on our side. They want to perform laparoscopy to see if they can either repair the tube or remove it because it is no longer functioning and causing me more issues than what I already have going on. We've decided to forgo our typical travels over Thanksgiving so I don't have to take too much time off from work. After I heal from the surgery, the doc said we will most likely have to do injections to get me regulated and ovulating on my right side. Long story short, I have a lot on my mind. So, I went to the gym after work and sweated some of my anxiety out. Better than internalizing it all like I normally do, which normally makes me barf. Really, I kind of have that problem like Stan on South Park. I tend to throw up when I get really nervous. Ha!!

Enough about that. When I really need to calm my stomach down, I tend to prefer meals that are a little less flamboyant than my regular spicy, ethnic tastes. Mashed potatoes, cheese, and pastas do the trick. Just like this evening's meal which contains two of the above- pasta and cheese. 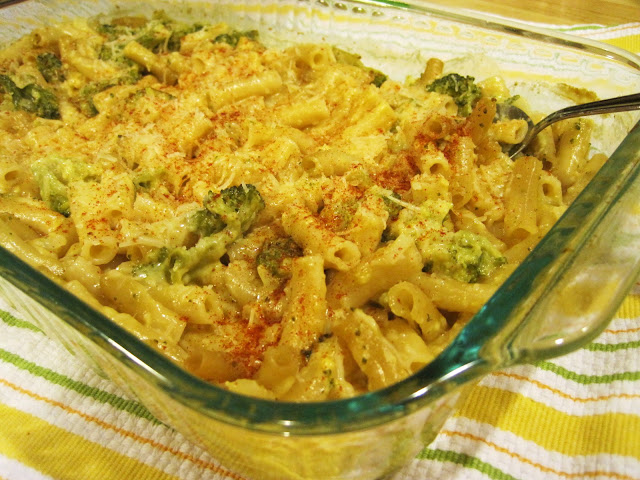 This was so comforting, cheesy, and exactly what I needed on an "eh" kind of day. I was able to sneak in some veg with the lovely broccoli addition. A sprinkle of paprika gave the dish a happy retro feel. You can assemble this meal ahead of time and as usual there is no need to bother with boiling the noodles or adding any additional starches. G-free comfort food baby!

Spray a 9' x 13' baking dish with non-stick cooking spray and set aside. Melt the butter in a large non-stick skillet over medium heat. Add the onion and cook for 4-5 minutes, stirring occasionally until the onion becomes translucent. Pour in the milk and cheeses. Stir constantly until the cheese is melted. Remove from the heat and set aside.

Toss the noodles and broccoli together in a large mixing bowl. Add the cheese mixture, stir until evenly coated (the mixture will be soupy), and pour into the casserole dish. Cover and store in the refrigerator until you are ready to bake and serve. When you are ready to bake, remove the dish from the refrigerator and let set at room temperature for at least 15 minutes while you oven preheats at 350 degrees. Bake in the oven for 30-30 minutes or until bubbly in the middle. Give the pasta a little stir before serving and enjoy!
Posted by MrsNick at 7:18 PM