Wow! Say the last part of this recipe three times fast. That is your challenge for today:) Actually, your challenge should be to make use of some leftovers. We happened to have leftover steak courtesy of my brother-in-law, Todd, also known as Tater Todd, Little Toddy, and just Toddy. If you've read my blog before or happen to know Todd, you know Todd loves his meat. He especially loves a good meat sale. A few months ago, Todd called me to inform me about such a sale and asked if I wanted to partake in the special. I asked about the quality. It was good ol' fresh Iowa beef that needed to get sold. So, I chose to purchase the steak as it was down to about a dollar per pound. Wicked, wicked cheap I tell ya! Todd graciously bought them, stored them, and I later reimbursed him. What Todd did not tell me was that they were practically dinosaur size cuts of beef. Huge!! I should have taken a picture, but  if you know Todd you probably already believe me. We actually have more of these Fred Flinstone like cuts in our deep freeze.

I pulled out one of these steaks from the deep freeze before leaving for our brief get away last weekend. I think it probably took a majority of the weekend for the steak to defrost in the fridge. Fred Flinstone size or not, it was a great, quick meal we could throw on the grill Sunday night without having to rush out to the grocery store. The only problem? We had a ton of leftovers! Being I hate to waste food, I thought it would be fun to try the meat with my favorite potato. 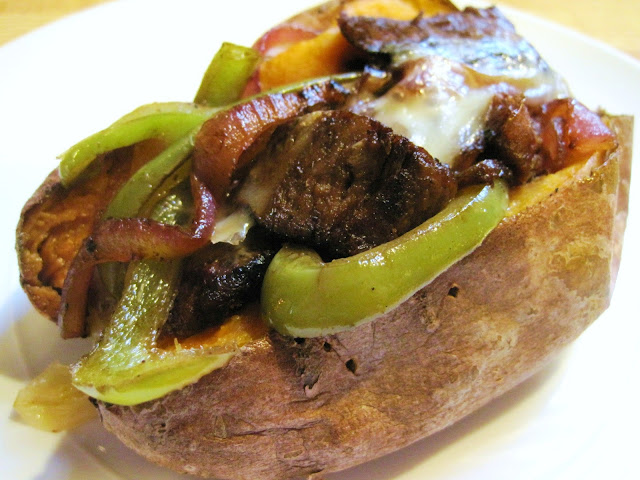 These Philly Cheese Steak Stuffed Spuds are a great use of leftovers. Here I've taken baked sweat potatoes and stuffed them full of smoked mozzarella, sauteed onions and peppers, and leftover grilled steak. If you don't have smoked mozzarella cheese, any cheese will do. It could not be any easier or tastier for a weeknight meal.

Preheat your oven to 400 degrees. Place the sweet potatoes on a nonstick baking sheet. With a fork, poke several holes into each potato so the potatoes do not blow up in the oven. Place in the oven and bake for 30 minutes or until softened.

Meanwhile, heat a large nonstick cooking pan over medium-low heat. Spray with nonstick cooking spray and add the peppers and onions. Sautee, stirring occasionally, for 10 minutes or until the vegetables begin to turn slightly brown along the edges. Add the steak. Cook, stirring occasionally, for an addition 5 minutes or until the steak is heated through. Remove from heat. Take the potatoes out of the oven. Using oven mitts and a knife, cut each potato almost in have leaving a little uncut room to hold the potato together. Spoon the veggie and steak mixture into each potato. Top each with a slice of cheese. Place back into the oven and cook another 5 minutes or until the cheese begins to melt.

P.S.- Thank you to all who have left contacted me via Facebook in regards to my last post! Your thoughts and prayers mean more to us than you will ever know!!
Posted by MrsNick at 1:21 PM