Everyone has a different pallet. Mine can sometimes be very adventuresome. Other times I really like pretty common stuff. For example, today while I was working out at the gym I got the biggest craving for a Wendy's sour cream and chive baked potato and chili. I kept trying to think of other things I could eat at home, but the hankering did not cease. Honestly, I gave in and I have no regrets. I freakin' love Wendy's chili. I've never even attempted to make a copycat version. I'd rather just drive and get the real deal. It's not that adventuresome right? Just pretty common.

Another example of something pretty common that I had not had in years, pimento cheese. For some odd reason, I just felt the need to make some for this year's dips and a dessert week. I had never tried pimento cheese until working at Head Start. At first, I was kind of like, "What's the big deal? This looks disgusting." Then, I spread some on a quarter piece of plain white bread (this was before going gluten free by the way). I gave it a chance. It seriously changed my life. Who knew something so simple could totally elevate saltine crackers or plain white bread? Processed cheese, pimentos, and mayo. That's it. I guess grandmas know what they're doing when it comes to mayonnaise concoctions. 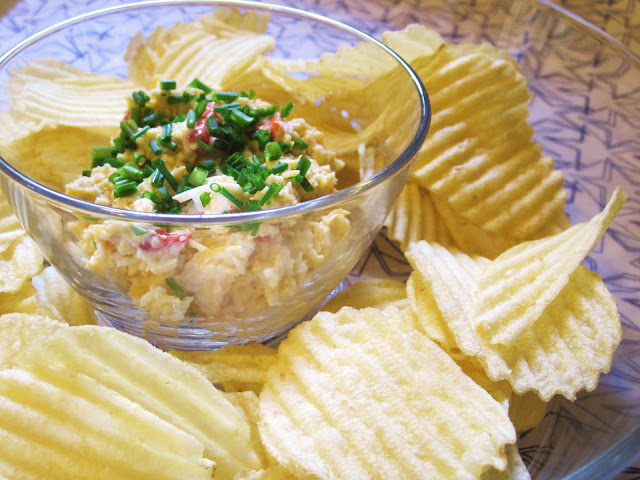 This spread/ dip actually has absolutely no mayo. None. Instead, I took a can of artichoke hearts, drained the liquid off, and ran them through my food processor until they were silky smooth. Yes friends, artichoke hearts. These puppies not only add the creamy texture of mayo, but also pack a nice little bit of fiber and protein. Serve with potato chips, crackers, or as a spread for sandwiches and you will give your taste buds a surprising adventure.

Place the artichoke hearts in a blender or food processor. Blend or process until creamy and smooth. You may need to stop the processor or blender to scrape the sides every now and again to evenly process all of the artichoke hearts. Place the pureed artichoke hearts in a mixing bowl. Add the remaining ingredients. Stir until combined. You can serve immediately with chips, crackers, or as a spread for sandwiches or cover and store in the fridge. I like to top mine with chopped chives for an added pop of color.
Posted by MrsNick at 12:18 PM