This is not another boring meatloaf recipe. I did not get to eat a lot of meatloaf as a kid. Nope. I don't know if my mom and dad ate too much and banned it from the house or if my mother felt it wasn't healthy enough. I'm not sure. I didn't even know that I liked it that much until I made some for myself. The first batch I ever made when I first started cooking, turned out dry yet oddly greasy. I thought, "Well that's why my mom never made it." The Bear encouraged me to try again. Being I love my husband so much, I decided to make some more. The next batch turned out okay. It was better. I used turkey instead of beef. It was okay, but lacking that certain something until I dowsed it with a ton of ketchup. These days I think I've made something pretty special. 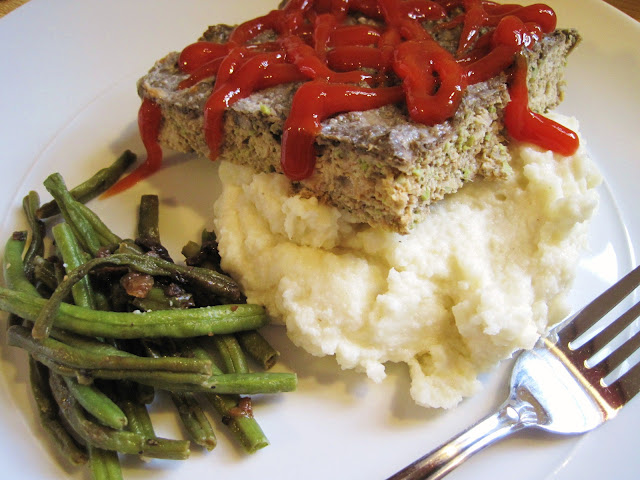 Yup, still quite a bit of ketchup. It was not because it needed it. I just thought it looked pretty and I like ketchup. On the original menu post, I called this Mediterranean Meatloaf. After tasting it, I didn't think it tasted very Mediterranean. It tasted like meatloaf should. Meaty and delicious. For this batch, I used ground chicken. It was cheaper than beef at the grocery store this week. And if you've hung around my blog before, you know I've managed to sneak in some veggies. The veg keeps the meat nice and moist. The chicken is nice and lean so you aren't left with nasty grease all over your pan or plate. To keep with the Drop 10 Challenge, I've added edamame and mushrooms. Two super foods that add metabolism boosting powers to your mother's traditional meatloaf. Meatloaf just got vegified friends!

Preheat your oven to 350 degrees. Spray a loaf pan or 9 x 9-inch baking dish with non-stick cooking spray. Set aside. Place the zucchini, mushrooms, and edamame in a food processor. Process until the mixture becomes the consistency of the ground chicken. In a large mixing bowl, add the veggie mixture, cheese, chicken, egg whites, ketchup, onion, cornmeal, and salt and pepper. Mix with your hands until combine. Press the mixture into your loaf pan or baking dish. Bake in the oven for 30-35 minutes or until a meat thermometer reads 165 degrees. Remove from the oven and serve.

* Noteworthy tips: In the picture above, I did not use mashed potatoes. Gasp! These are cauliflower mashers. Another wonderful veggie boost! I simply steamed 1 bag frozen cauliflower florets in the microwave for 4 minutes on high uncovered in a glass dish with 1/2 cup skim milk, 1/8 teaspoon garlic powder, and 2 tablespoons butter. Then I placed everything in the food processor, added some salt and pepper, and processed until everything was smooth and creamy. They are so good!