All I can really say to sensor myself right now to mask all the swear words that could fly out of my mouth is, "Good gravy!" Life is so incredibly awesome. Awesome in incredibly good ways. Awesome in incredibly messed up ways. Let's just say I am glad I am still on my blood pressure medication. I've also aged and matured some like a fine wine and can handle such awesomeness. Good or bad. To sum up some of the crazy after being sick last week, I have a really great story. What would seem to be a typical relaxing Friday night, turned for a trip to the emergency room after the Bear sliced his finger on my recently sharpened chef's knife. Why he used the big ass chef's knife instead of the awesome Pampered Chef pizza cutter I bought specifically with him in mind, I will never know. It was pretty brutal and I am not being dramatic. I had a great deal of blood to clean up when we got home. My female instinct and all first aid skills instantly kicked in as I wrapped that puppy up with paper towels, applied pressure, and added a final wrapping of ice pack ice cubes. The Bear wanted to change his Iowa State jersey shorts for pants after said wrapping. I said if you can get them on by yourself while I check the sink for any lost body parts and put on sandals then fine. He did not argue. Three hours, five stitches, and a tetanus shot later we made it home. Then we had to wake up bright and early for the wedding I have been waiting for in Omaha. The wedding was fantastic!! The weather was perfect. The pastor was great. Everyone looked wonderful and I got to spend some well needed time with my sorority sisters. Oh, the yin and yang of life. It is one crazy ride and I absolutely love every second:)

So, I was planning on having a menu post complete with all the trimmings. Needless to say, after the grocery shopping and prep on Sunday I completely crashed. Thus, I bring to you my final recipe from last week that I totally love. Later this week I will share the recipes I've put together for the menu. All recipes are very tasty and can be put together in a pinch. Crazy Corn Dip was from last week, but I felt it was worthy of sharing because of the name (hello crazy life) and its true awesomeness.

Long ago before I really understood what I was doing in the food blog world, I brought you Crazy Corn Nachos. I claimed they were the best nachos ever. They were pretty good. I had tried to lighten the original recipe up a bit, but knew it could still get healthier. Since I was craving nachos as of late, I decided to challenge myself and see if I could make them a) Drop 10 friendly and b) good enough for the Bear to devour. I did succeed. 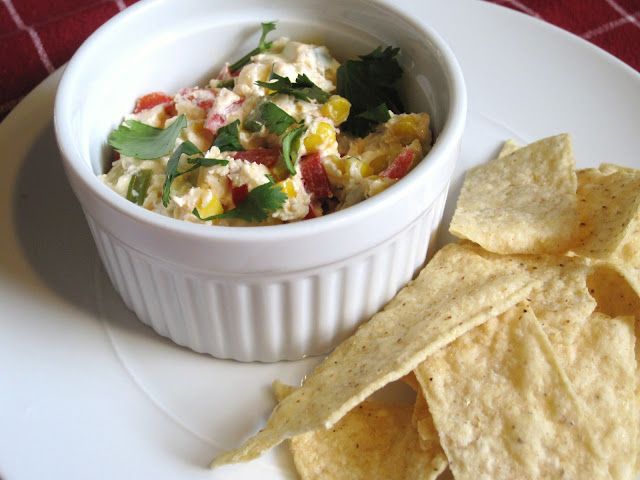 Perfect for a Friday night treat with a side of skinny margaritas or as a fun dip for an office potluck, this corn dip is given a secret little weapon with the addition of non-fat Greek yogurt. I think this will be making an appearance very soon at our next teacher's lounge potluck!

Place all ingredients in a microwave safe dish. Heat in the microwave for 2 minutes. Stir and heat again for another additional 2 minutes or until the veggies have softened and the cheese is melted. Stir until smooth. Serve with tortilla chips.