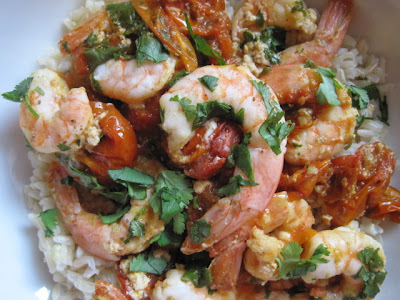 I'll be honest, as healthy as seafood can be, we don't eat much of it in the Nickel household.  Being we live in Kansas, there isn't a quality supply unless you want to pay out the biscuits at Whole Foods.  Costco and Sam's aren't too bad, but it still isn't as fresh as it could be.  Hy-Vee sometimes has an okay selection too, but it's still a gamble.  Not to mention the fact that my youngest sister, Amy, is deathly allergic to shrimp.  I'm leery to cook any seafood for fear that it won't turn out right, someone might get sick, or that my husband won't touch it.  Seafood is just too risky.

Tonight I decided to take the gamble.  I bought the Bear some donut holes to ease his disgruntled manner.  Something about baked goods always helps a cranky husband:)  Donut holes or not, I think I won this hand.  He said it was "good" and that he "wouldn't mind having it again."  My trick to making my shrimp not taste too much like the sea...a good buttermilk soak.  I soaked my thawed shrimp in buttermilk and one teaspoon Old Bay seasoning for a couple of hours in the fridge.  It made the shrimp very tender and took out some of the fishy taste I think frozen seafood often has.  I'm not sure how it works, but it definitely helped.  My other crafty way to save some pennies, I didn't really use sun dried tomatoes.  I actually used some frozen oven dried tomatoes I made myself back when grape tomatoes were on special.  I take one pint of cherry or grape tomatoes and spread them on a baking sheet lined with foil sprayed with non-stick cooking spray.  Then, I lightly drizzle the tomatoes with a little extra virgin olive oil, pop them in the oven at 350 degrees and let them roast away until some of the tomatoes have burst or for about 45 minutes to an hour.  You can then store the tomatoes in the freezer and use them in pasta, pizza, or in this dish!

Heat a large non-stick skillet over medium heat.  Heat the olive oil and add the garlic cooking until the garlic become fragrant.  Add the tomatoes and stir until combined.  As the tomatoes begin to heat through, begin crushing the tomatoes with the back of your spoon.  Cook, stirring occasionally for 3-5 minutes.  Add the cumin and chili powder and cook stirring occasionally for another 3 minutes.  Add the shrimp, one at a time from their buttermilk soak.  Dispose of the buttermilk.  Lightly stir a couple of times and cook the shrimp in the tomato mixture until the shrimp begin to turn pink.  This should only take about 5 minutes.  You don't want to over cook the shrimp or they will get rubbery.  When they turn pink they are fully cooked.  Remove from the heat and add the lime zest, lime juice, and cilantro.  Salt and pepper to taste.  You can serve over rice as I did or I think it would be lovely with pasta or maybe wrapped in warm corn tortillas served as shrimp tacos.