How has your weekend been? Ours has been so relaxing. After being so busy this summer, it has been nice to not have a whole lot on the weekend agenda but cleaning, prepping for the week ahead, and absolute relaxation. It's even better when the Bear pitches in and helps me clean. Score! 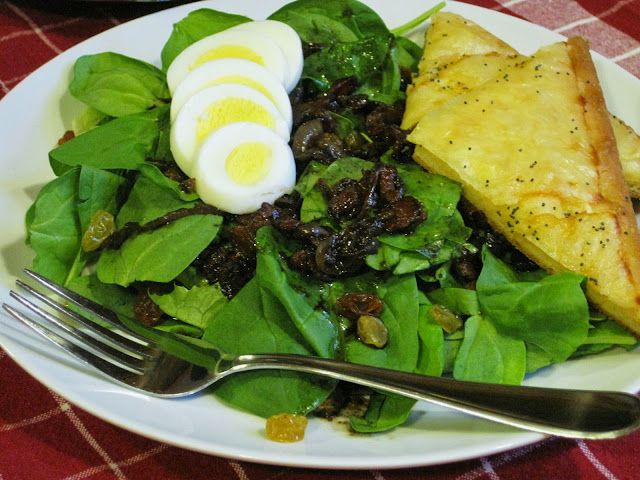 And a score for the Bear since I left the mushrooms off the grocery list and did not include them in this evening's Sunday Salad. We've been eating in a lot these days and neither one of us is minding one bit. Unless it is out of convenience or for something out of the ordinary, I feel like I can make a lot of restaurant dishes at home for a lot less money. This salad is one I used to get when I wanted a good entree salad. Bacon and onions are deglazed in the pan with a douse of balsamic vinegar mixed with brown sugar and Dijon mustard to make a stellar warm dressing that wilts the spinach ever so perfectly. Served with a hard boiled egg and golden raisins for sweetness and you've got one amazing entree salad!

Place the spinach in a large salad bowl. Sprinkle the raisins over the spinach. Set aside. Place the bacon and onions in a large nonstick skillet and heat over medium-low heat. Cook, stirring occasionally, until the bacon and onions begin to brown (about 8 minutes). Add the vinegar, brown sugar, and mustard. Stir until combine. Simmer for another 5 minutes or until the mixture begins to thicken and reduce. Remove from heat and pour over the spinach and raisins. Toss to coat. Top the salad with the sliced hard boiled eggs and serve.
Posted by MrsNick at 7:12 PM