Kansas City experienced another major winter storm last night. The snow started right when I got home from work. Justin made it home shortly after me, which was a huge relief. Then, the snow switched to rain and back to snow again. We have yet to shovel the drive knowing that this stuff is a lot heavier than last week's snow. Good thing we have this awesome meal to look forward to again tonight. Now if I just had some margaritas... 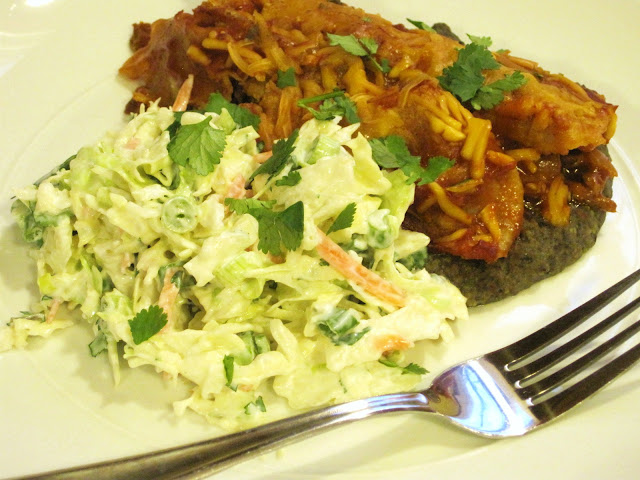 My leftover Chipotle Pork Tenderloin gets another use in these saucy BBQ Pork Enchiladas. Served with a side of "refried" black beans and edamame and cool Cilantro Lime Slaw, this meal will have you dreaming about the warmer weather to come. Leftovers never tasted so good!

Preheat your oven to 375 degrees. Spray a 9' x 13' inch baking dish with non-stick cooking spray. Set aside. In a large mixing bowl, beat together the pork, cream cheese, and 1 cup cheddar cheese. Set aside. Heat a large stock pot over medium heat. Add the olive oil to the pot. Add the onion and cook, stirring occasionally for 5-6 minutes or until the onion begins to caramelize and turn light brown. Add the enchilada sauce and BBQ sauce. Stir until combine and remove from heat. Spread 1/2 cup of the sauce in the bottom of your baking dish. Set aside. Place your tortillas on a large plate. Cover with a damp paper towel. Microwave for 1-2 minutes or until the tortillas are pliable enough to handle. Fill the one tortilla at a time with 2-3 tablespoons of the pork mixture. Roll and place seam side down into the baking dish. Repeat with each tortilla. Pour the remaining sauce over the enchiladas. Bake at 375 degrees for 30 minutes. Then, remove from the oven and sprinkle the remaining 1 cup of the cheese. Bake another 10-15 minutes or until the cheese begins to bubble and melt in the middle. Remove from the oven and sprinkle the cilantro over the enchiladas.