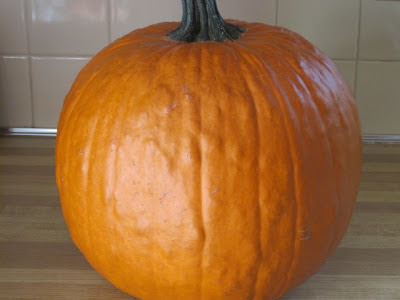 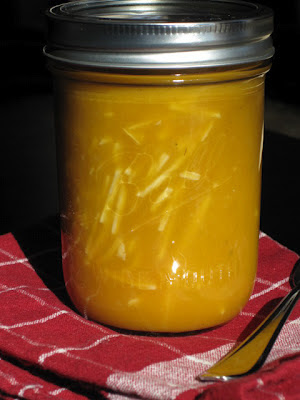 I know it's a littler late/early, in the year for a pumpkin recipe.  And, you might be thinking one of two things.  First, "How did she keep her pumpkin around for so long without it rotting?!"  Second, you are probably thinking, "How and why on earth would she want to make a soup out of it?!"

Well, I kept the pumpkin nice and healthy by hiding in the basement from my husband.  Every fall when pumpkin season arrives, he raises a stink about my pumpkin purchase.  He always says, "Once fall is over, you're getting rid of it in the trash."  The funny thing is, in the last eight years I've known him, I've never thrown a pumpkin away.  One time, I left the pumpkin out on the front stoop of one of the condos we lived in. It froze and snowed, and I just kicked the pumpkin into the snow and shoveled a bunch of snow over it.  The next spring, we had precious little pumpkins growing in the front yard:)  Those little gems weren't thrown away either.  I gave the mini pumpkins to my students as prizes.  A few years later, I got the most perfect Cinderella pumpkin.  I gave that pumpkin to my mom so she could grow pumpkins in her yard.  This year, I didn't have anyone to give a pumpkin to, so I chose to hide it try and make soup.  Luckily, Justin has a good sense of humor about my pumpkin loving shenanigans.


First, spray a large roasting pan with non-stick cooking spray and pre-heat your oven to 350 degrees.  Next, with a sharp knife, cut a lid on the top of you pumpkin, as pictured below. 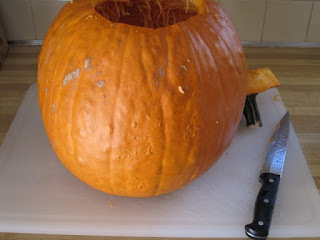 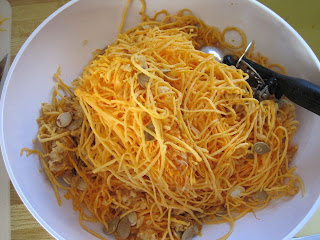 With an ice cream scoop or a large spoon, discard the guts and seeds.  You can keep the seeds if you enjoy roasting the pumpkin seeds for a snack.  I chose not to, as I had soup to tackle.  Place the pumpkin into your roasting pan.

Using the pumpkin as your cooking vessel, dump all ingredients into the pumpkin, give it a good stir, and place the lid back onto your pumpkin. 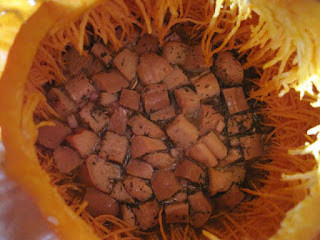 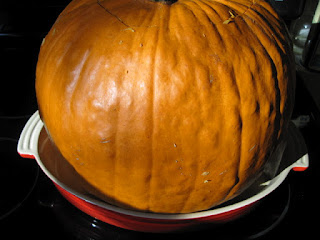 Place the pumpkin into the oven with the lid on the pumpkin for one hour.  You may have to lower your oven racks so the entire pumpkin will fit into the oven.  After the pumpkin has been in the oven for an hour, remove the lid, and roast for one more hour.  You can serve the soup in it's brothy state garnished with a little Parmesan or other lovely cheese.  I took on the extra challenge of pureeing some of the pumpkin (with the skin removed) and broth for lovely velvety texture.  I will warn you that no matter which method you choose to serve the soup, IT MAKES A LOT OF SOUP.  Make it for your friends, family, or a party.  I'm using mine for lunch this week and the rest for future soup meals.﻿
﻿
﻿
Posted by MrsNick at 7:43 PM