When I first started working in Kansas City, I had the opportunity to work on the Early Reading First grant project through KU Juniper Gardens Children Project, Project Eagle, and Head Start. For anyone who is unfamiliar with the teaching profession, several of the poverty studies that have been conducted in the country have been in Kansas City, Kansas. Being a young woman from Iowa who grew up in several small Iowa towns, my most urban teaching experiences were in the not so urban Des Moines, Iowa area. My eyes were opened and my horizons were expanded when I first started working on this grant project as I was placed in an inner-city Head Start preschool program in Kansas City, Kansas. It was rough. For the first time in my life, besides being a woman, I was in the racial minority. I was called several names, hit, spit on, urinated on, insert your own racial slur, etc. astonishingly to me by kids who were only the ripe of ages three to five years old. There were days in the beginning where I questioned what I had gotten myself into. There were a lot of tears shed in the bathroom because I hate to cry in front of people, where I would have to mentally and physically pull myself together just to make it through the day. But, over those three years, it did get easier. I learned how to manage my classroom with the toughest kids. I learned how to remain calm, shape behaviors, work with families, and above all how to handle, appreciate, and respect cultural differences. It was truly the most amazing experience in my teaching career. I have fallen in love with teaching in an urban setting and still teach for a school district in the area.

Some of the most fascinating experiences, were tied to the different foods I got to try. Nutrition is a large component to the Head Start philosophy. All meals served were family style. We practiced setting the table with the kids, passing the food around our tables, and modeled appropriate meal time behavior. This was always one of the favorite parts of my day and the food was relatively good. Although, I never did try the liver and onions they coyly disguised as "Cowboy Strips." Through Head Start, I gained an appreciation for many things including chicken served on a biscuit. Originally thinking the starchy combination was somewhat "wrong," I gave it a try. You know what? I was wrong and I am not afraid to admit that. 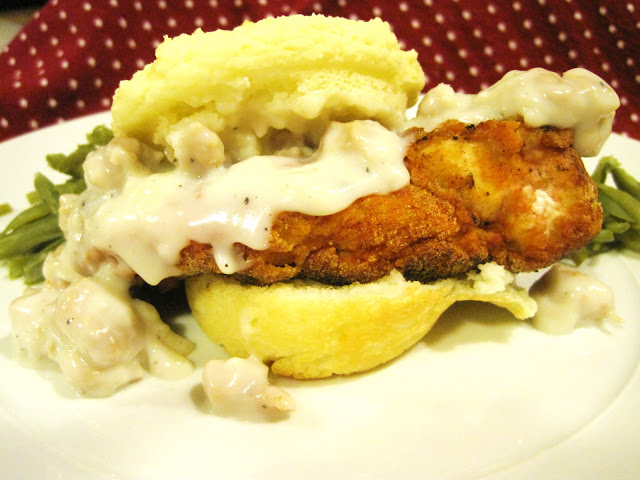 If you have not ever tried the chicken 'n' biscuits combo before, think of it as a chicken sandwich. I used gluten-free Bisquick mix as a shortcut. I always have a box in my pantry because it can be utilized in making pizza crust, pancakes, and as a muffin mix. In honor of my time served with Head Start here is my healthier, gluten-free version of Chicken 'n' Biscuits.

To make the biscuits: Pre-heat your oven to 350 degrees. Spray a muffin tin with non-stick cooking spray and set aside. In a large mixing bowl, combine the Bisquick, buttermilk, and egg substitute. Stir until just combined. Scoop the mixture into the muffin tin. Bake for 20-25 minutes or until the tops of the biscuits begin to turn light brown.

To make the gravy: Heat a non-stick skillet over medium heat. Add the chicken sausage and stir to loosen the meat. Cook and stir until the sausage begins to brown. Scrape the sausage into a small bowl and set aside. In a small dish, whisk together the milk, corn starch, pepper, and salt. Pour the liquid into the same skillet you cooked the meat in and lower the heat to medium-low. Continually stir the gravy until it begins to thicken. Add the sausage into the gravy and continue stirring until the gravy is to you desired consistency.

To assemble the sandwich, cut the biscuits in half. Place one have on a plate and top each biscuit with one chicken breast, gravy, and the other half of the biscuit.