Pizza is one of my favorite foods. Since going gluten-free, it has been somewhat of a challenge to find a good gluten-free crust my husband and I can both agree on. Most tend to be very sticky, appear to cook up crispy and soft, but then lend themselves to tasting a little gummy in the middle and rock hard on the outer edges. After experimenting with making my own and failing, trying many other brands available and failing, I've finally found a reliable source- Chebe! Chebe brands are offered in the Midwest at most local Hy-Vee grocery stores in their organic or healthfood department. Thus far, Chebe is the only brand that lends itself to costing, acting, and cooking itself the most to its gluten filled counterpart. For this recipe, I used the pizza dough mix. 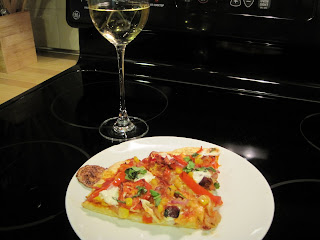 My Market Fresh My Market Fresh Pizza was inspired by a recipe featured this month in Cooking Light magazine, originally called "Local Farmer's Market Pizza." With the use of fresh corn, the recipe reminded me of a pizza version of a long lost recipe I have for Crazy Corn Nachos (recipe coming soon). I added some of my own fresh herbs and bacon because I like bacon. I also roasted my tomatoes.  Trust me, this is worth the extra little bit of roasting and really brings out the sweetness of the tomatoes.

2 C. thinly sliced onion (I used red onion, but anything you have will do)

1 C. fresh corn (I used frozen because the corn was looking a little picked over)

1.       Preheat oven to 425 degrees.  While your oven is pre-heating, slice your tomatoes and places them on a baking pan lined with a sheet of foil that has been sprayed with non-stick cooking spray.  Next, roast your tomatoes for around 30 minutes or until they start to appear to look like sun-dried tomatoes.
2.      While your tomatoes are roasting, prepare your dough and let rise.  Meanwhile, heat a large non-stick skillet over medium heat.  Add the olive oil and swirl to coat the pan.  Add 2 cups onion, thyme, and oregano.  Cook until the onions begin to caramelize, stirring occasionally.  Add the bell pepper and garlic; cook until the peppers begin to soften.  Add corn, salt, and pepper.  Cook for 2 to 3 minutes or until the corn is heated.  Finally add your crumbled bacon.
3.      Roll dough into a 16-inch circle.  Remove the tomatoes from the oven.  Place dough on a pizza pan or whatever pan you have available for cooking pizza.  Sprinkle the 1 cup shredded mozzarella.  Next, top with corn mixture.  Then, arrange the mozzarella slices and roasted tomatoes evenly over the topping.  Bake at 425 degrees for 20-30 minutes or until the crust is browned and the cheese is bubbly.  Remove from oven and sprinkle with the fresh basil.  Cut and bon appetite! Serves 6-8 slices depending on how you like to cut your pizza.
Posted by MrsNick at 10:19 AM