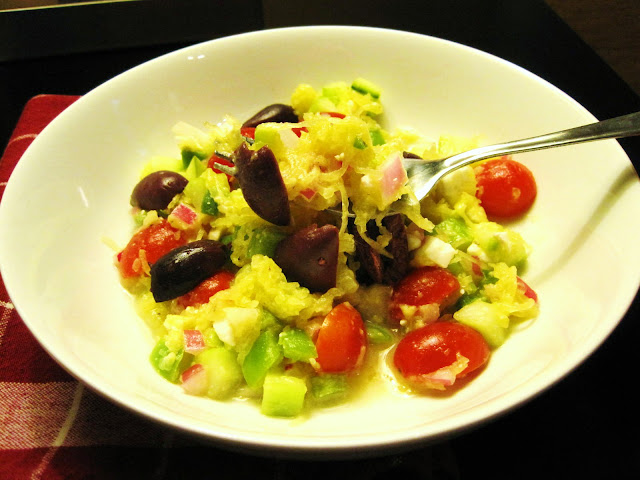 I don't know what it is, but I've been on a Greek kick lately.  My senior year of high school, I had the unique opportunity to waitress at one of the few Greek restaurants in southwest Iowa, A & G Restaurant and Lounge.  It was seriously one of the best jobs ever.  Not only did you learn every part of the restaurant business, but you also became a part of the family.  Tony always made sure you left after work with a full belly.  So many, many stories I could tell about Tony.  One of the best was his story about his heart surgery.

Tony used to smoke a lot, drink a lot, and eat a lot.  He wasn't a very big guy, but had the temper to burn all of the calories he consumed.  Tony once chased his son out of the restaurant with a butcher knife!  Anyhow, he had to go in for bypass surgery right around the time I had started working at A & G.  He had stopped smoking and gave up most hard alcoholic beverages, but suddenly had acquired a taste for beer.  The day of the surgery, they put him under, opened him up, and to medical amazement...Tony was fine.  After he woke up from surgery, Tony said they asked him about what he did to avoid death.  Tony replied to the doctors in his heavy Greek accent, "It must be the Fosters."

While this post would never make it on the A & G menu, I tried to honor all of the fond flavors I remember. Feta cheese, kalamata olives, oregano, and olive oil are all flavors that remind me of A & G.  This is just maybe a "skinnier" version of those memories:)

Heat you oven to 350 degrees.  Coat a non-stick cookie sheet with non-stick cooking spray.  Cut the stem off the spaghetti squash using a very sharp knife.  Then, cut the squash in half along the long side of the squash.  Using a spoon or ice cream scooper, scrape and discard the seeds.  Lay each squash half skin side up on the cookie sheet and bake for 30-40 minutes or until the squash is soft to a gentle nudge (with an oven mitt on your hand of course).  Remove the squash from the oven and cool until you are able to pick the squash up with your hands.

When the squash is cool enough to handle, use a fork to scrape the flesh of the squash into a large bowl.  Discard the skins.  Add the green pepper, cucumber, tomatoes, onion, and olives to the squash.  Toss together.  In a small dish, whisk together the olive oil, vinegar, mustard, garlic, oregano, salt, and pepper until combined and thickened.  Pour over the squash mixture.  Toss until coated.  Sprinkle with cheese and lightly toss again until the cheese is evenly disbursed.  You can serve immediately or chill until you are ready to serve.  Just make sure you give the salad a little toss before serving.
Posted by MrsNick at 7:47 PM