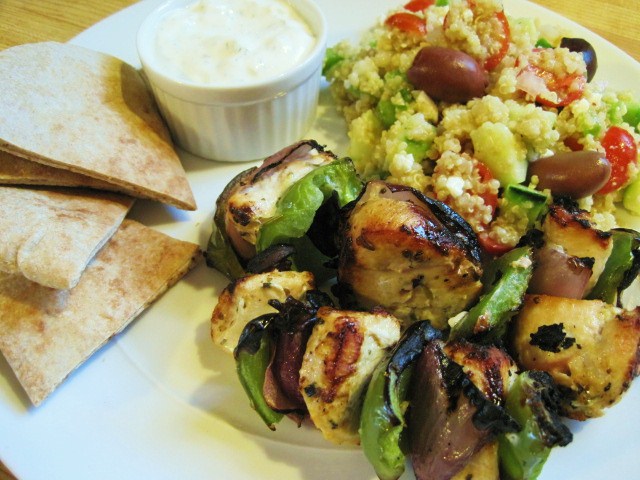 When the weather is as beautiful as it has been in the Kansas City metro area, you have to grill.  I was once told that Kansas City was the only city in the United States that had increased levels of ozone in the environment on the weekends due to the massive amount of people firing up their grills during the summer.  I don't know if it is a true fact, but there is always a lot of grilling going on, even in the dead of winter.  Not exactly environmentaly friendly, but what can we say?  We love our BBQ and our grills!

Kabobs are an easy meal to assemble and toss on the grill.  Keeping with a Mediterranean theme, I served ours with a traditional Greek yogurt sauce and Greek style quinoa salad.  The photo of above is the Bear's plate, as my plate was sans pita bread.  I pre-cut my veggies, marinated the meat, and made the salad the day before to save time on assembly.  Colorful, healthy, but not lacking in flavor!

In a small dish, whisk together the olive oil, grated lemon peel, lemon juice, garlic, salt, pepper, and oregano.  Pour into a large Ziplock bag and add the chicken breast.  Seal the bag and squish the bag with your hands to make sure all pieces of the chicken are covered in the marinade.  Marinade the chicken breast for 1-3 hours or overnight depending on how much flavor you would like to infuse.

Meanwhile in another dish, whisk together the yogurt, cucumber, dill weed, garlic powder, and salt.  Cover and store until you are ready to serve with the kabobs.

Fill a long baking dish with water. Soak skewers for at least 30 minutes before assembling the kabobs and grilling so the skewers do not burn.  Skewer a piece of the chicken, onion, and pepper onto the skewer and repeat until your skewer is full.  Repeat with other skewers.  Grill on medium-high heat for 5-7 minutes.  Turn each skewer and grill another 5-7 minutes or until the chicken is cooked through.  Remove from the grill.  Let the kabobs set for a few minutes so the juices in the chicken redistribute.  Serve with the yogurt sauce and pita bread if you choose.  You can also substitute the chicken for lamb or beef.

In a stockpot, bring the chicken broth to a boil.  Add the quinoa and gently stir until the quinoa is submerged in the broth.  Lower the heat to a simmer.  Let the quinoa simmer away until all the liquid is absorbed.  Cover and remove from the heat.  Set aside to cool.

In a small dish, whisk together the vinegar, lemon juice, Dijon mustard, garlic, salt, and black pepper until combined.  Set aside.

Fluff the quinoa with a fork.  In a large bowl, add the quinoa, cucumber, green pepper, cherry tomatoes, onion, and olives.  Toss together until combined.  Pour the dressing over the salad and toss again until combine.  Add the cheese and toss again.  You can serve this dish room temperature or store and cool until you are ready to serve.